Ubiquinone (Q10) plays an important role in energy production. It supplies energy to tissues and organs and is therefore important for the health of the organs.

Like Momentum® Carnitine, Q10 supports metabolism and this supplement is also suitable for people who could use some extra energy. It is enriched with vitamins B1 and B12, both vitamins that support the natural energy and therefore the energy level. Momentum® Q10 also contains vitamin E, which protects cells against free radicals. The protective effect of Q10 is also the reason why Q10 is widely used in facial care and cosmetics.

A Q10 pack contains 90 capsules. Do you have questions about the supplements? Contact us via info@swissfit.com.sg

Momentum® Q10 is a powerful and balanced Q10 supplement which is suitable for both long-term use and for vegetarians.
To improve the effect of the Q10 supplement, three important vitamins, B1, B12 and E. are added. They are described below. 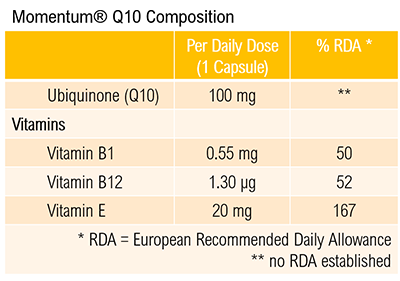 Vitamin B1
Vitamin B1 supports the body’s energy level and, similarly like Q10, is good for the heart. Sufficient intake of B vitamins is also needed for Q10 production.

Vitamin B12
Vitamin B12 activates the natural energy level in the body and can provide an extra energy boost. Just like vitamin B1, vitamin B12 is needed for the body’s own production of coenzyme Q10. Vitamin B12 also supports the production of red blood cells that transport oxygen to our organs.

Vitamin E
Vitamin E, similar to Q10, helps protect the cells against chemical compounds that cause oxidative stress. Because Q10 ‘recycles’ vitamin E into its original form and is given in a high dosage, it can function more effectively. Vitamin E also helps retain muscle tissue.

WHAT IS Q10 AND WHY DO WE NEED IT?
Coenzyme Q10 is a vitamin-like substance, also known as Co-Q10. It is produced in the liver and occurs naturally in human and animal cells. The highest concentration of Q10 is found in the heart, brain and muscles. Q10 has several important functions. It plays an important role in energy creation in the mitochondria. It supplies energy to all our tissue and organs and is therefore of great importance to the overall health of these organs. Q10 is a powerful antioxidant that protects the cells against oxidative stress. It is also believed to be beneficial for blood pressure and the heart.

WHAT FOODS CONTAIN Q10?
Q10 is produced naturally in our bodies and is also found in herring, sardines, mackerel, nuts, soya, broccoli and other foods.

WHY SUPPLEMENT Q10?
Just like Carnitine, Q10 plays an important role in energy production and the burning of fat. While Carnitine delivers fatty acid to the cells, Q10 ensures that those fatty acids are burned in the mitochondria. Q10 can therefore be useful for people who want to lose weight or stimulate fat burning. Aging can also create the need for supplementary Q10 because the body is less effective in producing Q10 from about the age of 40 onward. It may also be beneficial for people using certain medications (see statin use), as an antioxidant to reduce the consequences of oxidative stress and to counter heart and vascular disease. Studies have found that coenzyme Q10 has positive results among people with heart failure and/or high blood pressure.

Optimal fat burning
Q10 functions as a sort of ‘bellows’ in the mitochondria, helping to optimalise the burning of fatty acids. It is found in small quantities in our daily diets. It is therefore recommended as a supplement. It is used in combination with Carnitine by people who want to stimulate fat burning.

Use in combination with statins
Cholesterol lowering medications (statins) have the side effect of blocking Q10 production. Long-term use of these medications can lead to a lower concentration of Q10 in the body’s cells and lower energy levels. People using statins therefore often supplement their diets with a Q10 supplement.

Anti-aging
Q10 works as a strong antioxidant and protects the cells against oxidative stress and aging. It ‘recycles’ other antioxidants, such as vitamin C and E, enabling them to work more efficiently in the body. It is often used in various skin care products, such as facial creams, because it works as an antioxidant that slows aging.

Q10 IN COMBINATION WITH THE MOMENTUM® PROGRAM 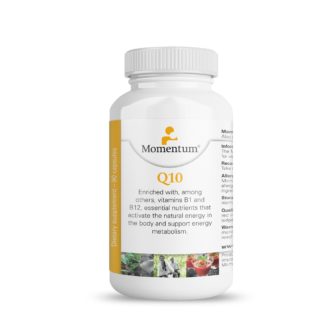